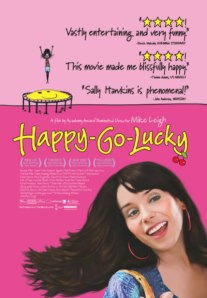 Periodically, my Facebook feed gets riled up when some ultra-rightwinger decries multiculturalism or eulogizes the antebellum South or says that Obama is going to put us all in concentration camps or engages in some other tacky political display. And then everybody will jump in there and be like, “Grr, those people are ruining America.”

Which is totally okay. I don’t support those beliefs, and those people certainly are harming America, and everyone tends to view these things through the filter of their own experience: if I’d had more negative interactions with ultra-rightwingers or with their policies, then perhaps I too would be extremely enthused about bashing them.

But I was recently watching a British movie, Happy Go Lucky (directed by Mike Leigh) that crystallized some of my mixed feelings about right-wing fanatics. In this movie, there’s an abrasive driving instructor who slowly develops a romantic attraction for his pupil, a kindergarten teacher. And this teacher also becomes somewhat fascinating with the driving instructor. She wonders what made him so uptight and abrasive and tries to probe him and figure out whether he was bullied in school.

And then he goes off on this tirade about how school is all about shoving you into a box and making you regurgitate the status quo and how if you do that then you end up successful and happy, but if you insist on thinking for yourself then you end up shunted out and miserable. And I am totally onboard with that…right up until the tirade turns into a racist rant.

I really liked the driving instructor. I admire anyone who really cares about what he does. One of the most charming parts of the movie is where he explains his teaching philosophy to the kindergarten teacher after she laughs at one of the silly mnemonics that he’s trying to make her memorize. He takes his job really seriously, and he honestly believes his instruction will save his pupils’ lives someday. This is a guy who’s schlubby and lonely, but he’s not pathetic. He’s found a way to live, and, to me, there’s something gloriously countercultural about that.

Oh, and he’s also a crazy racist who believes that the government is forcing nonwhite people to immigrate to Britain and shoving multiculturalism down peoples’ throats in order to deprive the noble British people of their heritage. And he also believes in some crazy connection between the American Government and Satanism. The Illuminati might be in there somewhere, too.

But is he ruining the world?

To me, it almost feels like he’s part of the solution and not part of the problem. This is a guy who’s obviously very switched on. He thinks for himself. He forges his own path in life. And he’s figured out a way to live in accordance with his own values. And, to me, that’s much more important than what you believe about immigration.

I mean, you just need to look at the medium and the message. The things that the guy says are repulsive. But the way he lives is admirable. During the five minutes per day that he talks about politics, he might be making the world a worse place, but during the whole rest of the day, he serves as an example to all the other sad, lonely, and trapped people who are searching for some way—any way—to live with integrity.