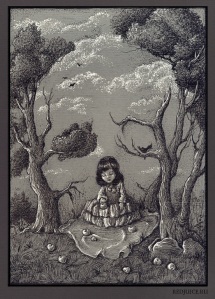 For my obligatory Thanksgiving post, I will just say that right now I am very thankful to be alive. It is an exquisite pleasure to be able to be able to set goals, make progress towards them, and generally feel the slow extension of my mastery over a greater and greater portion of both my life and the world around me. I feel very little anxiety. The future will be full of challenges, because I am setting out to do challenging things, and I expect that horrible things will happen to me, but I’ll get over them, eventually. And even if I don’t, the worst thing that can happen is that I’ll die.

I cannot pretend, though, that I feel no anxiety over death. Normally, the fact of death is not something that particularly bothers me. But whenever I get into a very high-functioning state, a little anxiety does start to creep in: I feel that soothsayer whispering in my ear, “This is all going to end, someday…”

For me, that day is almost unimaginably far away. I’ve slowly come to terms with the fact that–according to actuarial tables–I have at least fifty more years of life left. Since, for the last ten years, I’ve more-or-less believed that I wouldn’t live past 50, this is a startling expansion of life. I’ve even started saving for my retirement!

However, I know that it’s coming almost faster than I can bear. One thing about doing so much daily logging is that you see how quickly time passes. I look at my spreadsheet and think, “Oh god, has it really been two whole weeks since that night when I ate 3500 calories?” Something happened during those days, but in that moment, the time is elided–it feels like nothing happened at all. And I know that’s at least a little bit like what I’ll feel like in 50 years. I’ll try to remember what’s happened between then and now and I won’t be able to think of anything at all. And then I’ll die.

The analogue, for me, is all the time that I’ve frittered away over the past fifteen years. When I was drinking, I used to say, “I have no regrets. I’ve always done exactly what I wanted to do.”

And that was true, at the time. But now I have regrets. Right now, every day of my life is, on an experiential level, much better than it was when I was between the ages of 12 and 23. In the past four years, I’ve had more fun and learned more and experienced more and achieved more than in all the rest of my life that came before that time. When I was in grade school, I tried to stretch one day’s worth of experience and make it last a week: I’d replay video games and re-read books and live inside my mind and never venture outside my comfort zone. And when I went to college, I did new things, but they were the wrong things: they were fun things, but they weren’t things that stayed with you. Most of my college experiences literally made no impression on me–they were wiped clean the day after they happened. It’s only in the last four years that I’ve really learned what it means to be alive.

And it’s not about material circumstances. It’s not about having friends or free time or selling stories. I remember even during my first year of sobriety, when I was at work for ten hours a day and I’d come home to my parents’ h and struggle to stay awake as I did my obligatory 2 hours of reading and 2 hours of writing. And I’d go to sleep at midnight and then lay awake, unable to sleep, for six hours, and then, when the alarm went off, I’d simply lay motionless and stare at the ceiling in hopeless frustration–how could anyone possibly expect me to do something after only three hours of sleep! My arm used to ache with the tension from all the smoking and caffeine. And I barely knew anyone in the city and wasn’t sure how to meet people, so I’d go weeks without seeing or speaking to anyone.

I can’t say that I made very much progress during that year. Like, whoah, at this point in 2010, I still living in my parents’ house in DC, I was still smoking, still overweight, had never completed a novel, didn’t know how to talk to people, had only published three stories at professional rates, and was generally kind of anxious and hapless.

But that was a year when I was, for real, doing everything that I could possibly do.

I can’t say the same about the ten years before it, though. Some people set out at age 14 with the same spirit of wonderment and determination that I had at age 23. And those people get to experience nine more years of life than I ever will! And those nine years are ones where you have huge quantities of free time, substantial disposable income, and are at the peak of both your physical beauty and your ability to learn!

I do mourn for the loss of those nine years. If I’d been able to really use them, then today I’d be a far richer person.

Obviously, I’m not dead yet. I’m still a young person. I have plenty of vitality left in me. And some would say that many people go their whole lives without discovering how to live (although I’d question whether that’s really true–it’s unbelievable to me that a person could stay in a rut for decades at a time).

But I only bring up the nine lost years because thinking about them carries some of the same anxiety as thinking about death. The fact is, they’re gone. And it’s pretty meaningless for me to say that I wish I’d lived them. Even if I had, they’d still be gone. Although something of those years would’ve stayed with me, the bulk of them would’ve evaporated, just like most years do. Even if I’d lived those years, I’d still be here, now, doing something. The regret just comes from feeling like there could’ve been more–feeling like I had something and I wasted it. Similarly, fear of death is about all of life’s possibilities that I won’t ever get to realize: all the experiences I’ll never have, people I’ll never meet, historical figures that I’ll never get to assassinate using my time-travel machine.

In some ways, though, that’s a positive feeling. Because there’ve been plenty of times in my life when I felt that everything was the same, that there was nothing new to learn, that life was meaningless. For me, the fear of death is a reminder that I value my life.

2 thoughts on “Whenever I start enjoying life, I start to become really afraid of death”